At Nix Sensor Ltd., we’re lucky to work with professionals in many different industries who use the Nix Pro to capture & record color. One of our users is Danny Dávila, who works in the Film & Television Industry and uses the Nix Pro while location scouting. In particular, he is the Production Designer for Season 3 of Graceland and Season 1 of Complications (USA Network). 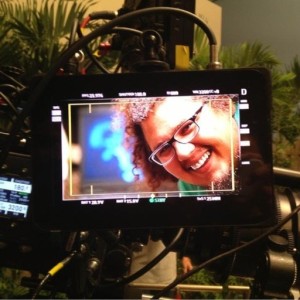 Why is color important in your industry?

Color sets the mood of a Scene. It warns us of Danger. It makes us feel good, bad, indifferent, happy, sad. Color can be calming, or energizing. Color is the building blocks on how we as film makers present a scene to the audience. Color is the backbone of how we build a character without having to explain who that character is. We see them through their environment.

Where do you get color inspiration?

My color inspiration comes from anything and everything under the sun. My color choices are limitless and I can find them at any place and time.

How do you use the Nix Pro Color Sensor?

I use the Nix Pro in my day to day life. I keep the Nix Pro as part of my location scout package but I also carry it with my in my pocket on most days. If I see a color I like I quickly grab it and take a photo to remember where I logged that color.

How is color used in Graceland (or other projects you’re working on), and how does it add to the show? What would the show be like if color use wasn’t a concern?

Film in general is reliant on color. Even black-and-white Film Production Designers used colors on their sets to set the mood for the actors. Color brings life to the set and allows for the words on paper to become actuality. I couldn’t imagine a world without color in the film industry.

Do you have any advice for young people looking for a career in the Television & Film industry?

Find what you love about filmmaking and pursue it vigorously. This career is not glitz and glamour. It’s hard work, long hours and stress like you can’t imagine but it’s also one of the most rewarding careers out there. There is no feeling in the world like being able to join millions of people in watching something you’ve helped create. Something you’ve poured your heart into. Something you have dedicated so much of your life to.

What are some things that people would be surprised to learn about working in television & film? Are there any memorable stories from projects you’ve worked on?

The film industry in general is very tough. It’s hard to make it, it’s hard to climb the ladder and get noticed, it’s hard to continue to push the limits and continue to grow no matter how high you get up the ladder, and it’s hard to pursue a personal life outside of work. With that said, we do have our fun. Pranks are the norm, tomfoolery is welcome (as long as it doesn’t slow down the shoot).

We are a brotherhood. We are a team of misfits and hooligans. Thugs and Nerds. We support each other through the toughest times and celebrate together in the best times.

I don’t think the general public knows how long it takes and how much footage is captured to make a single episode of television. Here are some numbers: