What does blue represent?

The primary color blue is the color of trust and responsibility.

Blue has positive affects on both the mind and the body. It evokes rest and can cause the body to produce chemicals that are calming, and exude feelings of tranquility. The color blue helps to slow human metabolism, is cooling in nature, and helps with balance and self-expression.

However, alike all other colors, blue hues have varying meanings. For instance, electric or brilliant blues become dynamic and dramatic, promoting feelings of exhilaration. On the other hand, softer blues may come across as cold or uncaring, and can dampen spirits.

Blue around the world

Blue has different meanings all around the world. About 53% of the flags in the world contain the color blue in it.

In Western Cultures blue represents trust, and authority. Alternatively, it is associated with tranquility, as well as, with sadness.

Blue indicates immortality, and healing in Eastern cultures, as well as relaxation in Asian cultures. In India, it is the color of Krishna and connotes strength.

The color blue is used as amulets to ward off evil in countries including, Turkey, Greece, Iran, Afghanistan, and Albania.

In the Middle East, the color blue symbolizes safety, protection, and spirituality. However, it can also indicate mourning, alike Latin and South America.

Blue is a primary color in painting, with the secondary color orange as its complement. On the visible spectrum, blue light is defined as a wavelength of 400−495 nm.

Blue is sharply refracted by the eyes. This causes the lens to flatten and to push the blue image back. We perceive that blue areas are receding and smaller. The same refraction causes visual fog if used excessively in interior spaces.

A cross section of the human eye and magnification of the retina wall showing nerves that capture light and send it to rods and cones for analysis. Cones allow us see color. There are three kinds, each responsible for seeing red, green or blue (Source).

Where do blue pigments originate from? 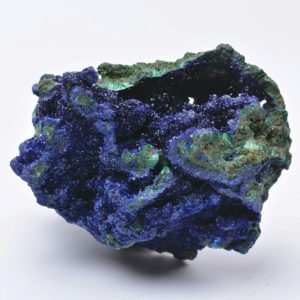 The first blue pigment was azurite, a natural mineral. The name “Azurite” comes from Latin.

Azurite is composed of basic copper carbonate, found in many parts of the world in the upper oxidized portions of copper ore deposits. Also used prolifically in the East, azurite can be found in wall paintings in Central China from the Ming and Sung Dynasties, as well as cave paintings at Tun Huang in Western China. Azurite was the most important blue pigment in European painting throughout the middle ages and Renaissance.

Egyptian blue is a copper calcium silicate that was the first synthetic pigment, and the most extensively used pigment from the early dynasties in Egypt until the end of the Roman period in Europe. Many specimens, well over 3000 years old, appear to have been minimally altered. 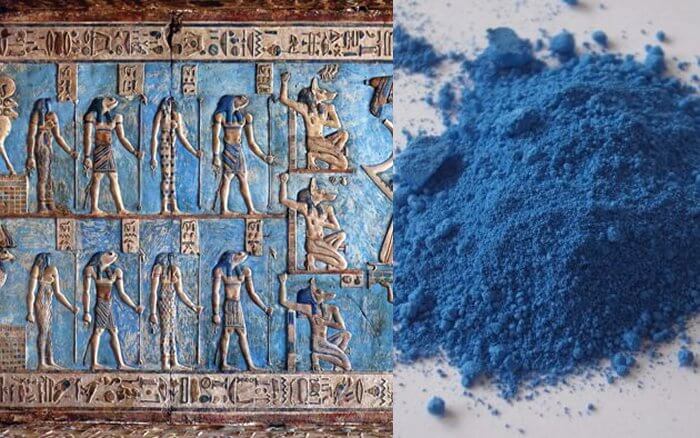 Egyptians manufactured Egyptian blue, which quickly spread throughout the ancient world. However, during the Middle Ages, the recipe for Egyptian blue was lost, and azurite and ultramarine from Afghanistan were the only sources of blue available.

The finest blue known to the ancients, was obtained from the precious stone lapis lazuli (lazurite), a costly mineral. The mineral lazurite is a complex sodium calcium aluminum silicate sulfate.  The name “Ultramarine” comes from Latin, where “ultra” means beyond and “mare” means sea.

Lapis lazuli has been mined for centuries from a location still in use today in the mountain valley of Kokcha, Afghanistan. First mined 6,000 years ago, the rock was transported to Egypt, and later to Europe where it was used in jewelry and paint pigment. Europeans called the expensive powdered pigment ultramarine, which literally means “over the sea”.

Ultramarine is famous for having been the most expensive pigment. It was more expensive than gold during the Renaissance.

First used in 6th century Afghanistan, the pigment found its most extensive use in 14th and 15th century, when it was used to illuminate manuscripts, and Italian panel paintings, often reserved for the cloaks of Christ, and the Virgin. It’s use as a pigment among ancient Mediterranean cultures is very rare.

Synthetic ultramarine is one of the best-documented pigments of the 19th century because its invention was requested of chemists, and not the result of their independent research.

Smalt is a finely ground blue glass that came into use for painting. The name “smalt” comes from Germanic origin. It’s a ground blue potassium glass containing cobalt used among the 15th, and the 18th centuries. In Europe the use of smalt as an artist’s pigment was widespread certainly as early as the late 16th century. Smalt was popular because of its low cost, and its manufacture became a specialty of the Dutch and Flemish in the 17th century. Smalt is known to be a fantastic dryer, and was used for this purpose. Additionally, it had been used to give bulk to thick glazes containing lake pigments, which are considered poor dryers. 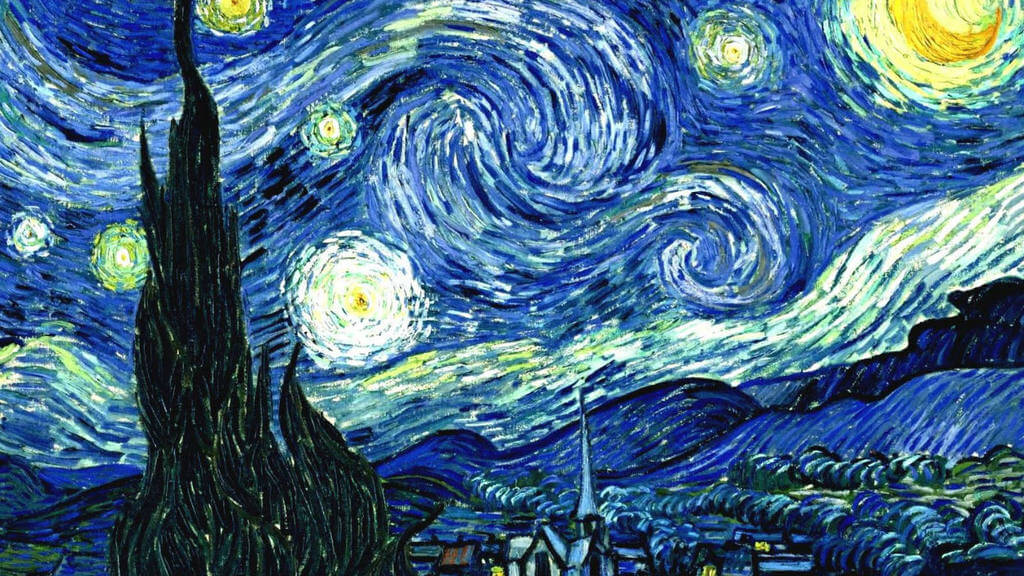 Prussian blue, called the first of the modern pigments. It has very high tinting strength but is only fairly permanent to light and air.

It’s an Iron-hexacyanoferrate accidentally formed while experimenting with the oxidation of iron. The pigment was available to artists by 1724, and was extremely popular throughout the 3 centuries since its discovery.

Stay tuned to explore a world of blue design and inspiration.