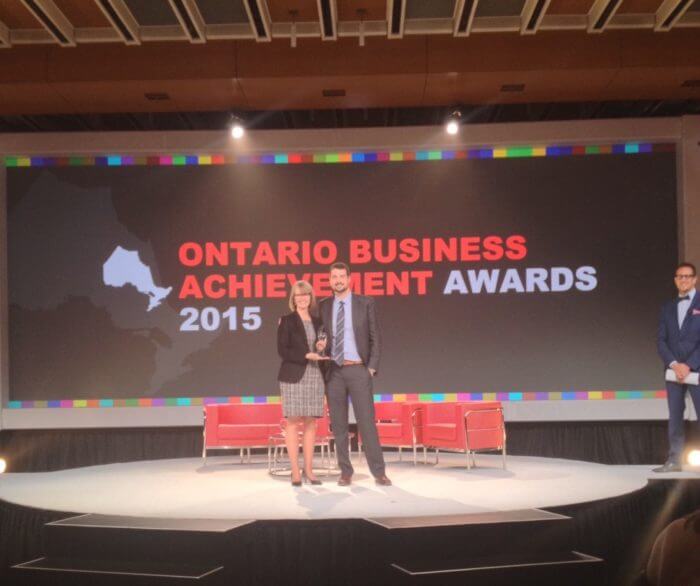 HAMILTON, ON – November 26, 2015 –Matthew Sheridan, inventor of the Nix Pro Color Sensor and President and CEO of Nix Sensor Ltd., was named Ontario’s Young Entrepreneur of the Year at the 2015 Ontario Business Achievement Awards on the evening of November 25. The Young Entrepreneur of the Year Award, presented by the Ontario Chamber of Commerce, is awarded to a young Ontario entrepreneur who has successfully built a unique and game-changing venture.

“It’s very exciting to be named Ontario’s Young Entrepreneur of the Year,” said Mr. Sheridan. “I’m proud to be able to bring this award home to Hamilton, as our success could not be possible without the most passionate employees, the best mentors, and most of all, Hamilton, the most startup friendly city in Canada.”

Nix Sensor Ltd. designs and manufactures high-precision color-sensing technology. Their flagship device, the Nix Pro, is a handheld device that can measure the color of any surface and provide that information to the user’s smartphone. Unlike current solutions, like color fan decks and smartphone apps, the Nix Pro Color Sensor’s patented design blocks out all ambient light and provides a calibrated light source to provide an industry-leading level of accuracy.

The Nix Pro Color Sensor was launched as one of the first official Canadian Kickstarter projects, where it raised $70,000 – double its original goal. Since then, Nix has quickly found traction as a low-cost, high-quality color measurement solution provider in the Paint, Food & Agriculture, Printing, and Textiles sectors.

“Entrepreneurs are the backbone of Ontario’s economic future,” said Allan O’Dette, President and CEO of the Ontario Chamber of Commerce. “Because of Nix Sensor Ltd.’s game changing technology, jobs have been created in Hamilton and design professionals now have access to a cutting edge tool that allows them to succeed in their respective workplaces.”

Nix Sensor Ltd. is based in Hamilton’s McMaster Innovation Park, and is a member of several Regional Innovation Centres and industry networks, including Innovation Factory (Hamilton) and the Ontario Centres of Excellence. All of Nix’s sensors are assembled and calibrated at their facilities in Hamilton.

“Nix has built a global reputation among color experts as an industry leader and problem solver. The early successes Matt and his team have achieved are helping to inspire the many young, ambitious professionals that symbolize the “New” Hamilton,” said Keanin Loomis, President and CEO of the Hamilton Chamber of Commerce. “One of the main drivers of our economy remains advanced manufacturing and we’re extremely proud to be able to say that every Nix Pro Colour Sensor is made here in Hamilton!”

Mr. Sheridan was also recognized as one of Canada’s top young innovators with the Ernest C. Manning Award of Distinction, which was presented on October 2, 2015 at an awards gala in Saskatoon.

In February 2015, Nix released the second version of their hardware, the Nix Pro, which features completely redesigned hardware and software. In addition to their success in developing custom solutions for professionals such as interior designers, paint contractors, and paint retailers, Nix has made consumer versions of the Nix Pro available for order at www.nixsensor.com.